Global warming, the phenomenon of increasing average airtemperatures near the surface of Earth over the past one to two centuries. Climate scientists have since the mid-20th century gathered detailed observations of various weather phenomena (such as temperatures, precipitation, and storms) and of related influences on climate (such as ocean currents and the atmosphere’s chemical composition). These data indicate that Earth’s climate has changed over almost every conceivable timescale since the beginning of geologic time and that the influence of human activities since at least the beginning of the Industrial Revolution has been deeply woven into the very fabric of climate change.

Human action has triggered a vast cascade of environmental problems that now threaten the continued ability of both natural and human systems to flourish. Solving the critical environmental problems of global warming, water scarcity, pollution, and biodiversity loss are perhaps the greatest challenges of the 21st century. Will we rise to meet them?

Giving voice to a growing conviction of most of the scientific community, the Intergovernmental Panel on Climate Change (IPCC) was formed in 1988 by the World Meteorological Organization (WMO) and the United Nations Environment Program (UNEP). In 2013 the IPCC reported that the interval between 1880 and 2012 saw an increase in global average surface temperature of approximately 0.9 °C (1.5 °F). The increase is closer to 1.1 °C (2.0 °F) when measured relative to the preindustrial (i.e., 1750–1800) mean temperature. 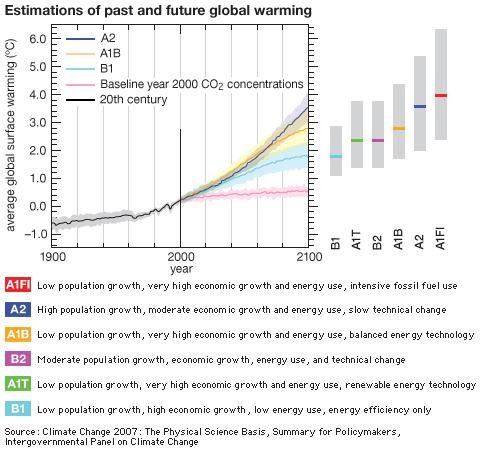 global warming scenariosGraph of the predicted increase in Earth's average surface temperature according to a series of climate change scenarios that assume different levels of economic development, population growth, and fossil fuel use. The assumptions made by each scenario are given at the bottom of the graph.Encyclopædia Britannica, Inc.

A special report produced by the IPCC in 2018 honed this estimate further, noting that human beings and human activities have been responsible for a worldwide average temperature increase of between 0.8 and 1.2 °C (1.4 and 2.2 °F) of global warming since preindustrial times, and most of the warming observed over the second half of the 20th century could be attributed to human activities. It predicted that the global mean surface temperature would increase between 3 and 4 °C (5.4 and 7.2 °F) by 2100 relative to the 1986–2005 average should carbon emissions continue at their current rate. The predicted rise in temperature was based on a range of possible scenarios that accounted for future greenhouse gas emissions and mitigation (severity reduction) measures and on uncertainties in the model projections. Some of the main uncertainties include the precise role of feedback processes and the impacts of industrial pollutants known as aerosols, which may offset some warming.

Many climate scientists agree that significant societal, economic, and ecological damage would result if global average temperatures rose by more than 2 °C (3.6 °F) in such a short time. Such damage would include increased extinction of many plant and animal species, shifts in patterns of agriculture, and rising sea levels. By 2015 all but a few national governments had begun the process of instituting carbon reduction plans as part of the Paris Agreement, a treaty designed to help countries keep global warming to 1.5 °C (2.7 °F) above preindustrial levels in order to avoid the worst of the predicted effects. Authors of a special report published by the IPCC in 2018 noted that should carbon emissions continue at their present rate, the increase in average near-surface air temperatures would reach 1.5 °C sometime between 2030 and 2052. Past IPCC assessments reported that the global average sea level rose by some 19–21 cm (7.5–8.3 inches) between 1901 and 2010 and that sea levels rose faster in the second half of the 20th century than in the first half. It also predicted, again depending on a wide range of scenarios, that the global average sea level would rise 26–77 cm (10.2–30.3 inches) relative to the 1986–2005 average by 2100 for global warming of 1.5 °C, an average of 10 cm (3.9 inches) less than what would be expected if warming rose to 2 °C (3.6 °F) above preindustrial levels.