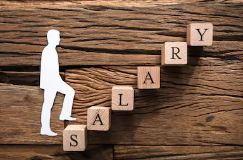 According to Article 75 of the Indian Constitution, Parliament decides the decisions of the Prime Minister and other Ministers of the Union.

This amount is periodically revised by the Parliamentary Act. The original amounts related to the salary of the ministers were mentioned in Part B of the Second Schedule to the Constitution, which was later removed by constitutional amendment. In the official information issued in the year 2010, the Prime Minister's Office informed that the total income of the Prime Minister is in the form of various allowances provided to him more than his basic salary.

According to a report from American magazine The Economist, Indian prime minister receives parallel salaries of $ 4106 on the basis of the ratio of Purchasing Power Priority. Based on the proportion of per-person GDP, this figure is the lowest in the world. After the prime minister's retirement, the Prime Minister is given a monthly pension of 20,000 and with limited secretarial assistance, Rs 6,000 office expenses are also provided.

Apart from secretarial assistance, free housing and SPG security of 24 hours-365 days, many other amenities are provided to the Prime Minister . Prime Minister receives the opportunity to make numerous free trips to the country and around the world.

Vehicles equipped with specialized and state-of-the-art security equipment are provided for the Prime Minister's presence, as well as being bullet-proof and bomb-proof, in such a way that despite the damage to his fuel tank, the explosion Does not happen. Also, the Prime Minister's special vehicle can run flat tires without going for miles.

In addition to special vehicles, special aircraft are also provided for the Prime Minister. It is interesting to note that Lal Bahadur Shastri did not own a car even after becoming the Prime Minister of India.

After retirement, for the five years after retirement, medical facilities, 14 secretarial executive, executive expenses, annual 6 Exclusive Arts Abroad air trips and numerous free train trips are provided to former office bearers for life-long free stay. SPG protection is provided to one year after retirement . After the completion of five years, he is given a personal assistant, an orator and free air and train ticket and monthly expenses of Rs 6000.